As stated earlier in this guide, formatting your metadata properly is extremely important. Proper formatting ensures your descriptive metadata ends up in the final Archivematica-created METS file. Opening up your METS file and looking at the metadata in the <dmdSec> portion of the file (near the top) will show you if metadata import was successful. Take a look at the document You’ve Just Made an AIP: A Checklist (Permafrost users only) for more information.

Above you can see some of the DC metadata added, such as the title and the subject.

Above you can see “tree type” as a custom metadata field.

Rights metadata shows up in the <rightsMD> portion of the file (further down, you can do a search for “rightsMD” to find it).

Above you can see that metadata has been added about a statute: the jurisdiction is “Canada” and the citation is “that legislation”.

Bag metadata will show up in the amdSec section of the METS file as pictured below: 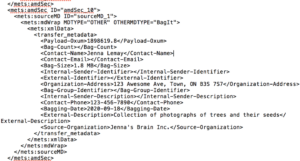 Taking the time to inspect all your metadata in the METS file is important, as sometimes the tiniest mistake can cause the metadata to not be structured properly.